Julian is a Didjeridu teacher,healer and performer with a passionate interest in Aboriginal Culture and music. His journey with the didjeridu started 20 years ago, with an introduction to Aboriginal  Didjeridu player Dereck Nannup by Heath Bergerson.

After being greatly inspired by their playing Julian began studying various playing styles of various players from around Australia.

In 1993 he started teaching Didjeridu around Perth and began street performance.

In 1993 Julian met a Senior Noongar elder in the south west of W.A Maxine strongly encouraged him to use Didjeridu for healing.

In 1996 after working for an Aboriginal art gallery he travelled to the U.S.A, Canada and Western Europe where he taught the instrument, gave healing sessions and performed regularly.

While living in Canada Julian started to perform in various venues mixing Didjeridu with various musical genres-including rock, jazz, blues and experimental world fusion. It was the fusion music he most enjoyed. In New York he performed with an Acid Jazz group as well as solo.

Julian believes in teaching the essence of what he was taught by Aboriginal players respectfully in regard to their traditions and culture.

Connecting with Mother Nature through the playing of the instrument is vital honouring the birds and animals and other creatures that are part of the local environment. Julian teaches various bird and animal calls as well as their accompanying rhythms.

In 1997 Julian was invited to the Northern Territory in Australia’s top end by an Aboriginal central desert artist to make, demonstrate and teach the Didjeridu. It was there he met Arnhem land aboriginals who taught him traditional techniques and rhythms that are thousands of years old in their origin. Some believe up to 10000 years old. In 1997/98 Julian and Jane travelled around Australia together playing their music and collaborating with Aboriginals in Queensland and Victoria.

While living in the Northern Territory Julian was adopted by two Arnhem land families who both have an ancient lineage to Didjeridu and Yidaki traditions.

Julian visited a Chief ceremonial elder and Master Didjeridu,(Mago) player-David Blanasi who taught him specific rhythms and songs that connect the player very deeply with nature. 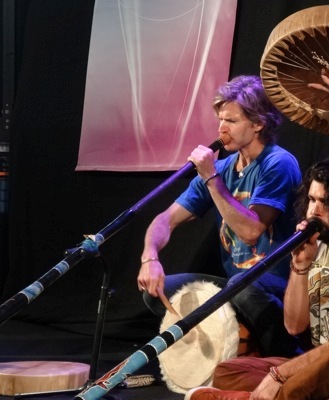 In 1997 Taught didjeridu at NAIDOC week, was invited by Jason Cockatoo

In 1998 Played Didjeridu with three other  Je-be-weng Aboriginal group performers and a dancer of the Wathaurong people of Victoria.

In 1999 with permission Julian taught some of these traditional techniques in Western Europe with his music partner Jane Barnacle,as well as forming a band together “RAJAJU”,a unique combination of Didjeridu mixed with singing and percussion.

They have recorded music of theirs in Switzerland for a Didjeridu compilation,Yidaki 3,as well as for two major  Billabong Films.Taj Burrows “Montaj”  and Jack McCoys “Blue Horizon”.This film features top award winning artists such as Cold Play, Foo fighters and Powderfinger.

In 2000 I was invited to play with Billy Webb as part of the opening of the Wardan Aboriginal Cultural centre at Injidup,south west of PerthIn 2001 Played Didjeridu for smoking ceremony with Nundjan Djiridjarkan,( Ken Colbung, and the Aboriginal women’s choir, at the Conscious living expo.

In 2005 was invited to play at the Minnawarra festival,Armadale,played didjeridu with Norm Stanley,with the Pickett brother dancers.

Was also invited to play Didjeridu by Willy Pickett for four Aboriginal dancers at Tambellup celebration In 2005 played Didjeridu at the Swan river,(Derbal Yerrigan), for Ken Colbung,(Nundjan),for the funeral ceremony for the Annalakshmi  centre founder.

In 2006 Invited to play Didjeridu with the Wadumbah Aboriginal dance group led by James Webb, I also assisted with painting up the dancers, before the event.

In 2006 Julian was recommended by Noongar elder Willy Pickett to work at a Sound Healing centre in Perth, after teaching his sons how to play Didjeridu, which then led onto a performance together for the Oz concert in front of 5000 people and was screened on two T.V stations.

Julian worked for four years at the healing centre,` Echoes’, and received a Personnel recognition award for the contribution he made to developing the Sound healing programs there and quality of his sound healing work. During this time he met Joan Winch and Bob Randall and gave them both several healing sessions, as part of the Echoes session with Didjeridu and Gongs.

Julian played Didjeridu for the opening of Kanyini for Bob Randall, (Elder and custodian of Uluru). 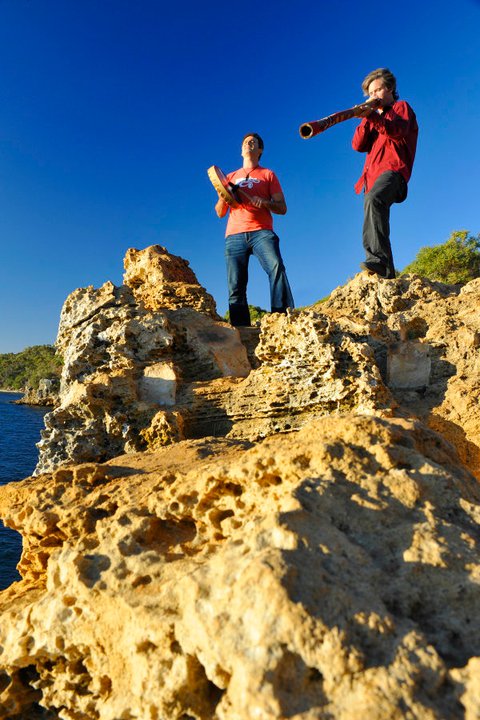 Julian spent a week at Uluru with Bob Randall and was taken out onto the land to listen and learn.

Julian also was invited to play Didjeridu for Jose Boyle for her Aboriginal story telling at a primary school.

In 2009 played didjeridu for Flower pit healing ceremony supervised and guided by Ken Colbung. Julian in 2009 joined a Sound healing group, ‘One Tribe’, in Fremantle where they do regular Friday night sound healing sessions using Sound,(onetribehealing.com.au)

In 2011 Julian was invited to play Didjeridu at the “Walking with Spirits” festival in Arnhemland in the Northern Territory.It is held at a sacred site with beautiful paperbark forest and stunning waterfall.This is an annual event and showcases traditional Aboriginal Dance, Song and Didjeridu and brings in Didjeridu players, Dances and Song men from different parts of Arnhemland, and musicians and singers from around Australia and the World. Julian after the festival recorded a CD with a Senior Elder Songman at a beautiful Billabong playing traditional Didjeridu.It will soon be released.

Julian has collaboratively recorded a CD using Ancient sound frequencies and is now offering  sessions where people can experience these sounds combined with colours projected simultaneously corresponding to the different energy centres,(Chakras ),of the body.

Julian’s aim in teaching, healing and performing Didjeridu is to impart the spirit of what he was taught respectfully and to connect people with nature through the various rhythms, songs and nature calls. Julian has met several Noongar  and Arnhemland Elders and has collaborated with them musically and culturally and has their approval and blessing to perform, heal and teach.